Vadym Dovhoryk, 23, a Ukrainian Special Forces soldier lays in the intensive care ward at the Kyiv City Burn Center. He was near Debaltsevo when his unit was shelled on the second day of the armistice commonly referred to as Minsk II. Mr. Dovhoryk was wounded in the attack and also suffered severe frostbite after spending three days in a forest before being detained by Russian supported separatist forces. He is now a triple amputee.

“We were ambushed. I was informed yesterday about all the guys. Two others and I went missing. One of them was buried yesterday. Another is in morgue in a Dnipropetrovsk, but his parents have not yet recovered his remains. They recognized him but are still waiting for the DNA test results. He was our commander.” Kyiv, Ukraine, March 25, 2015 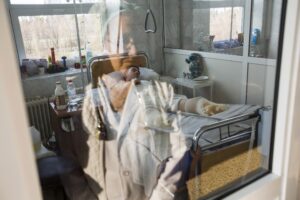