Vadym Dovhoryk, a Ukrainian Special Forces combat veteran from Kirovohrad, celebrates his 24th birthday with friends and volunteers in a park near the Kyiv City Burn center where he is undergoing treatment. Vadym was severely wounded on the second day of the cease-fire commonly referred to a Minsk II. Kyiv, Ukraine, June 21, 2015 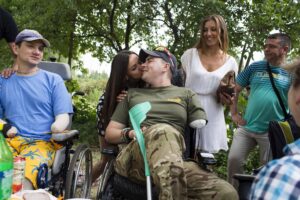