— “Could you really explain what it is?” I asked.

— “This is a play which implicates communication”, replies my companion after a long introduction. “The actors have their own positions; however they interact between each other any way they wish”.

— “This is the burst of energy!” Another man adds.

— “This is an emotional journey”, one more of them comments. “This performance contains little story of each of the actors. Nevertheless they transform into one big heart”

— “You know, it’s hard to express. You’ve got to see it!” They give up explaining.

In order to see it you’ve got to walk a bit. To slip through icy Zavodska St. in the industrial district Pidzamche, to be exact. Maneuvering between the cars parked right on the sidewalks along few hundred meters will get there. The mural ahead is the sign that we are getting close.

On the left we encounter a crescent-like, bulky building turned to the square with its wide panoramic windows opened to the whole city of Lviv, which welcomes the visitors with social realism and cosmic effects.

No entry staff. But wait — today everybody is welcomed.

We bravely walk through the turnstile and head upstairs while colorful rays of light touch our cheeks. Ninety one steps of accelerated breathing and here we are. We stop at the top floor of the former electronic medical equipment factory where noise and hustle welcome guests. The space around comes alive.

Excessive light from the door ajar blinds our eyes. I blink a few times to adjust from darkness.

The actors gather around their director for a short break after the rehearsal. A small room is full of red chairs put in a row. It also has a coat hanger, a tea table and a big carpet in the middle. We make ourselves comfortable on this carpet right next to the heater. 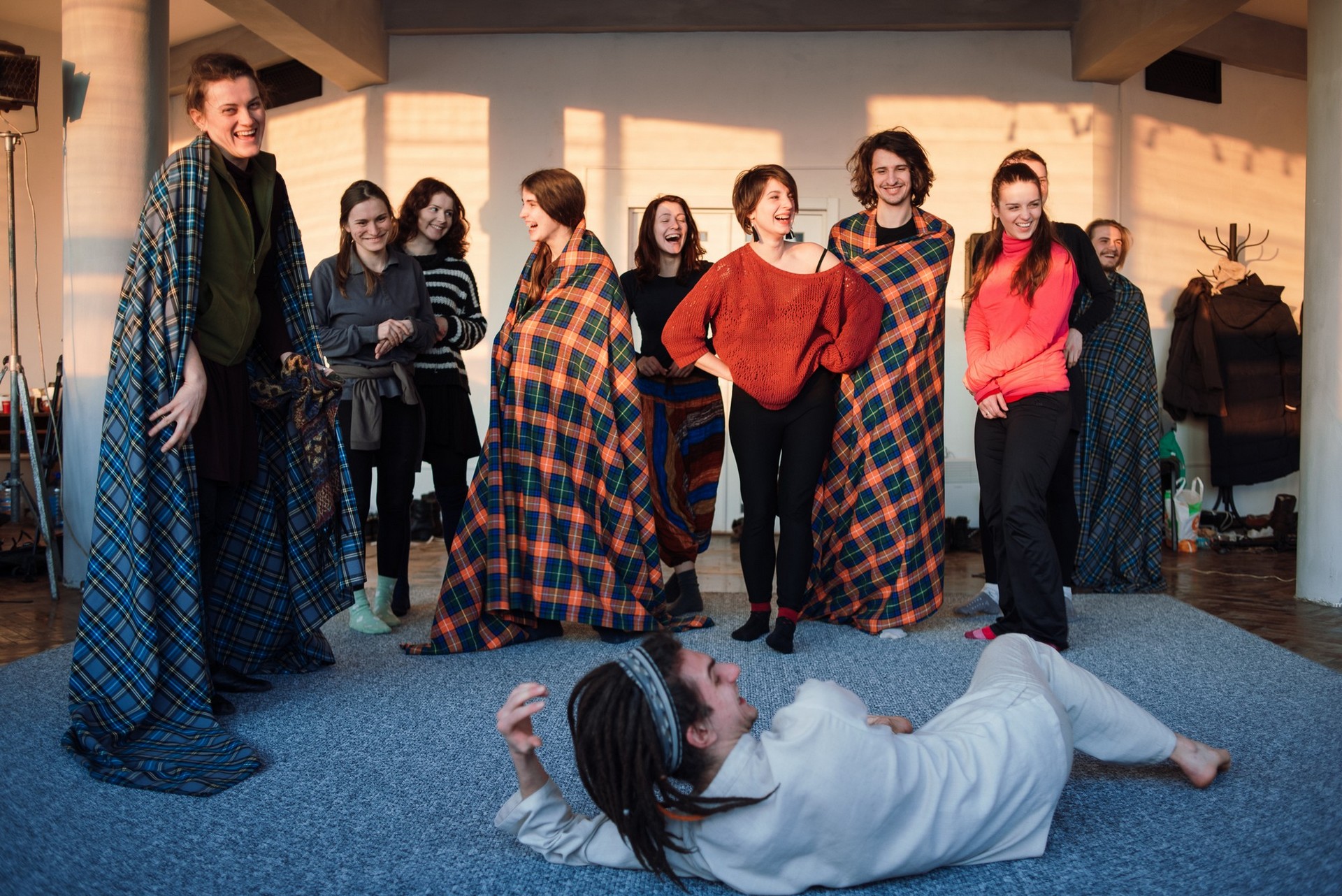 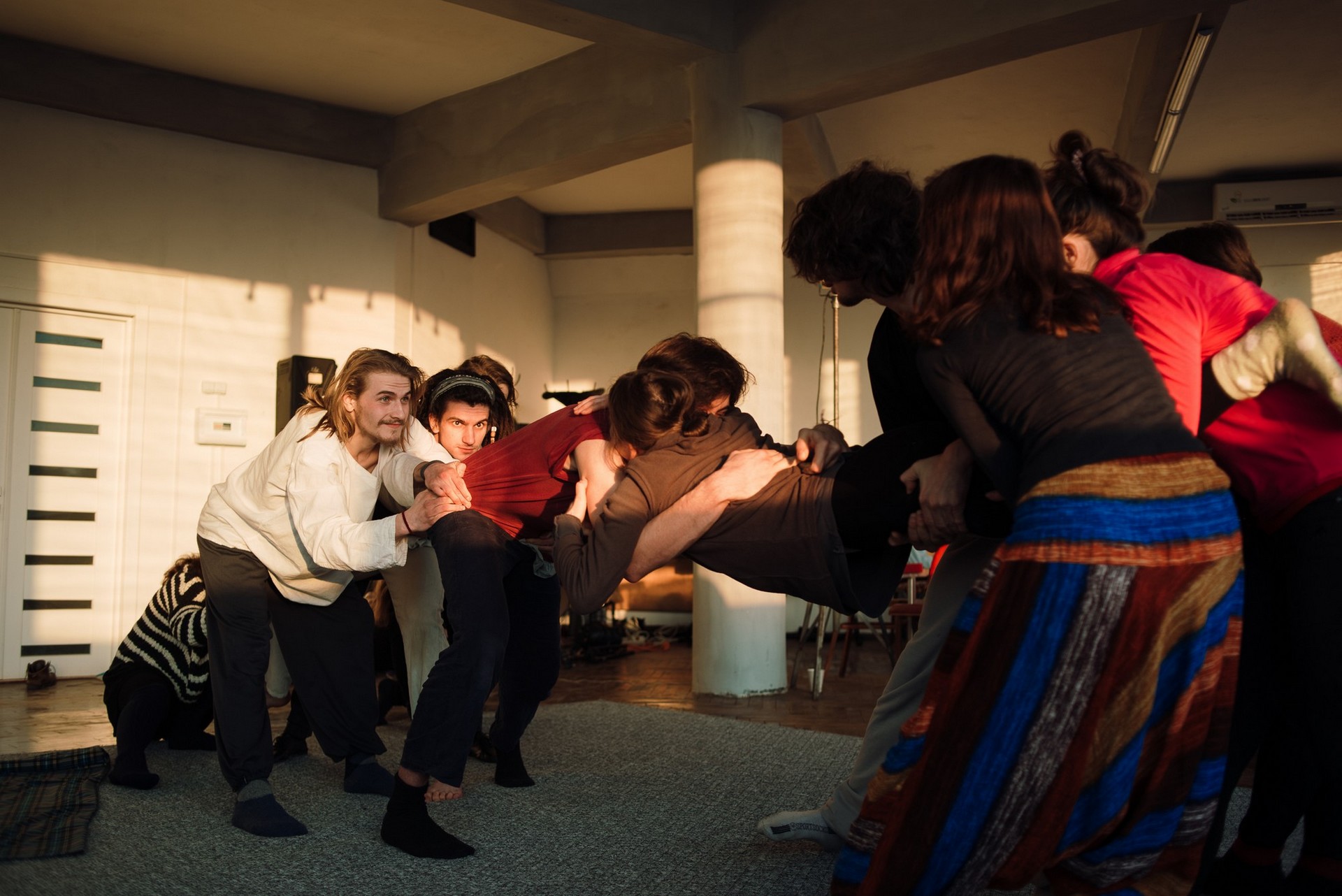 Solomia Kyrylova is 24. She has played in the theatre since she was 3. Solomia grew up here at Pidzamche. She tells about her childhood and the depressive atmosphere which has always been present here.

I feel very comfortable here, there are no restrictions or limitations. Our director always tells us: “You are free”

— “These streets remind me a horror movie. Once on the Wet Monday celebration somebody instead of water poured bleach on me. This place is very unusial.” She laughs. Solomia has already played a dozen of roles in Kolomyia Drama Theatre and she could have stayed there till the end of her acting career. “I participated in various plays starting with children’s ones and up to “Chasing Two Hares”. However the roles were distributed according to the size of your costumes”. She ironically comments. 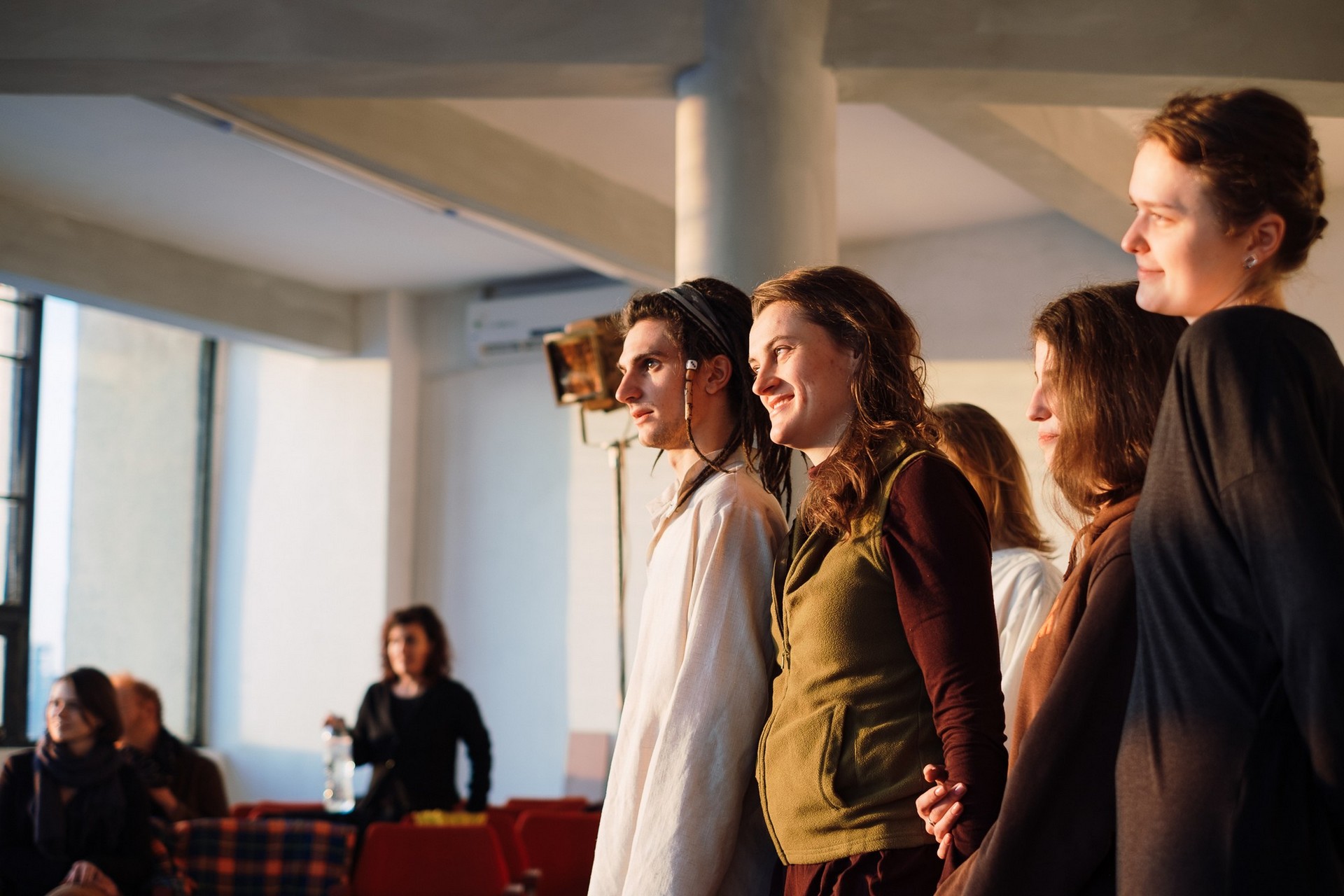 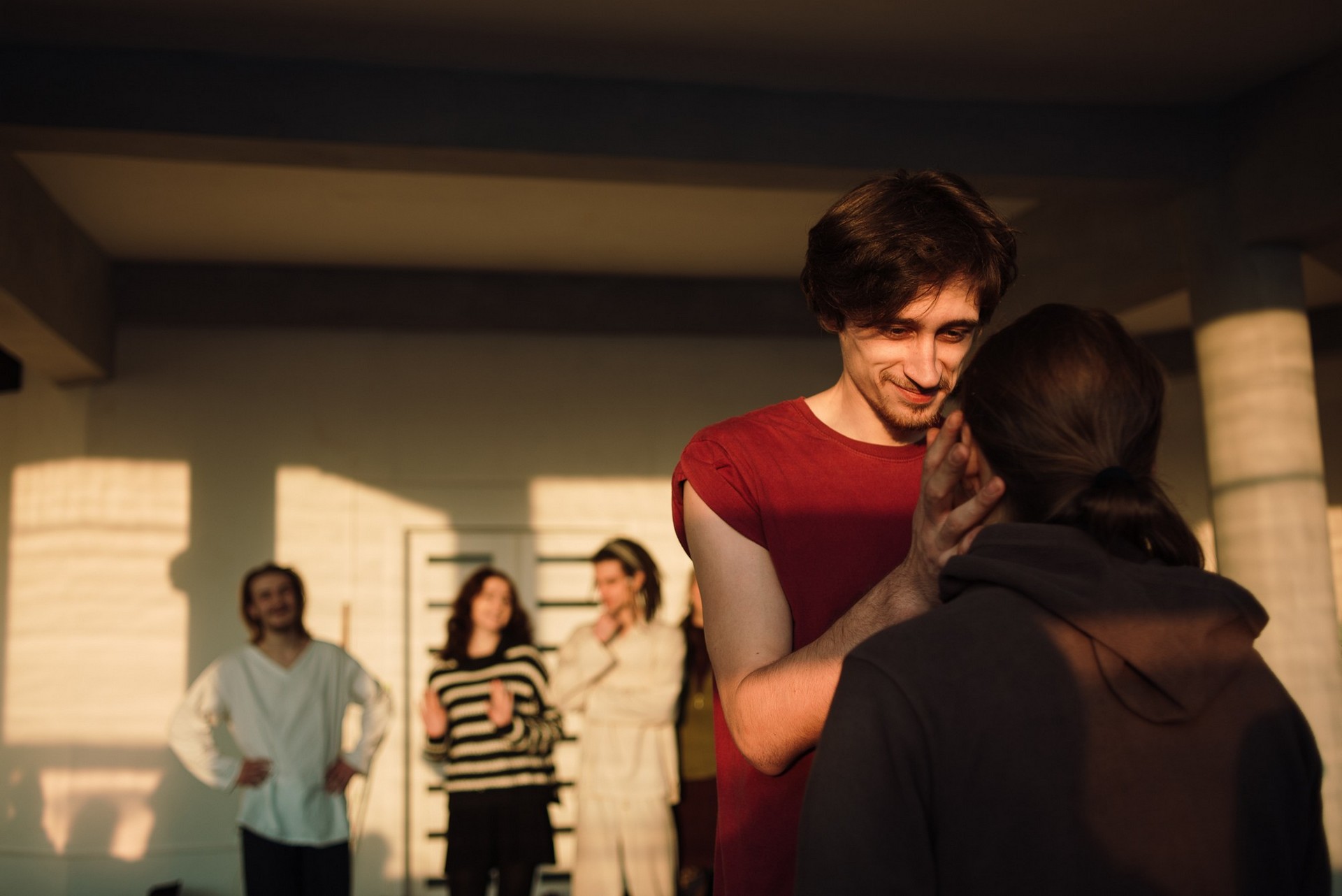 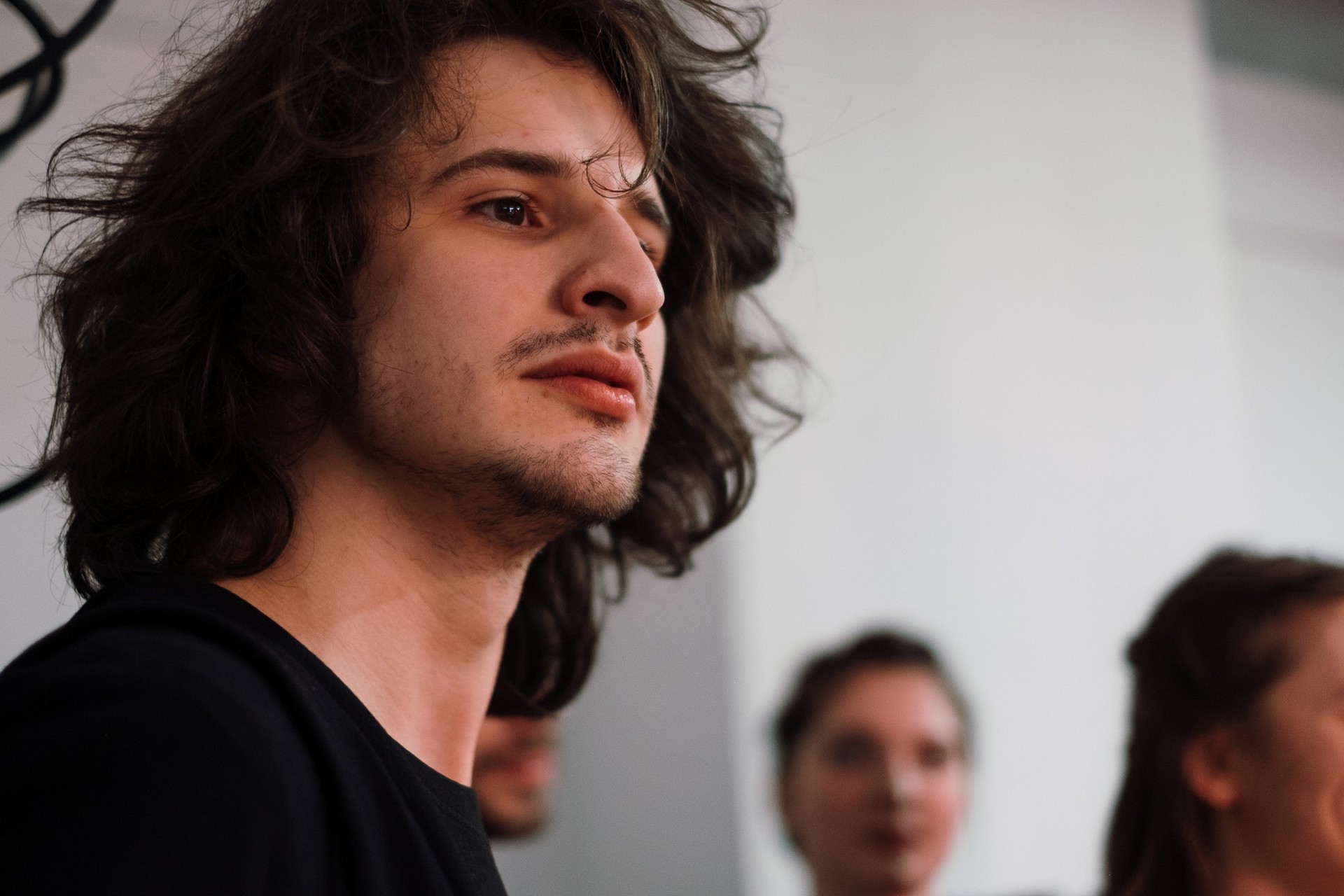 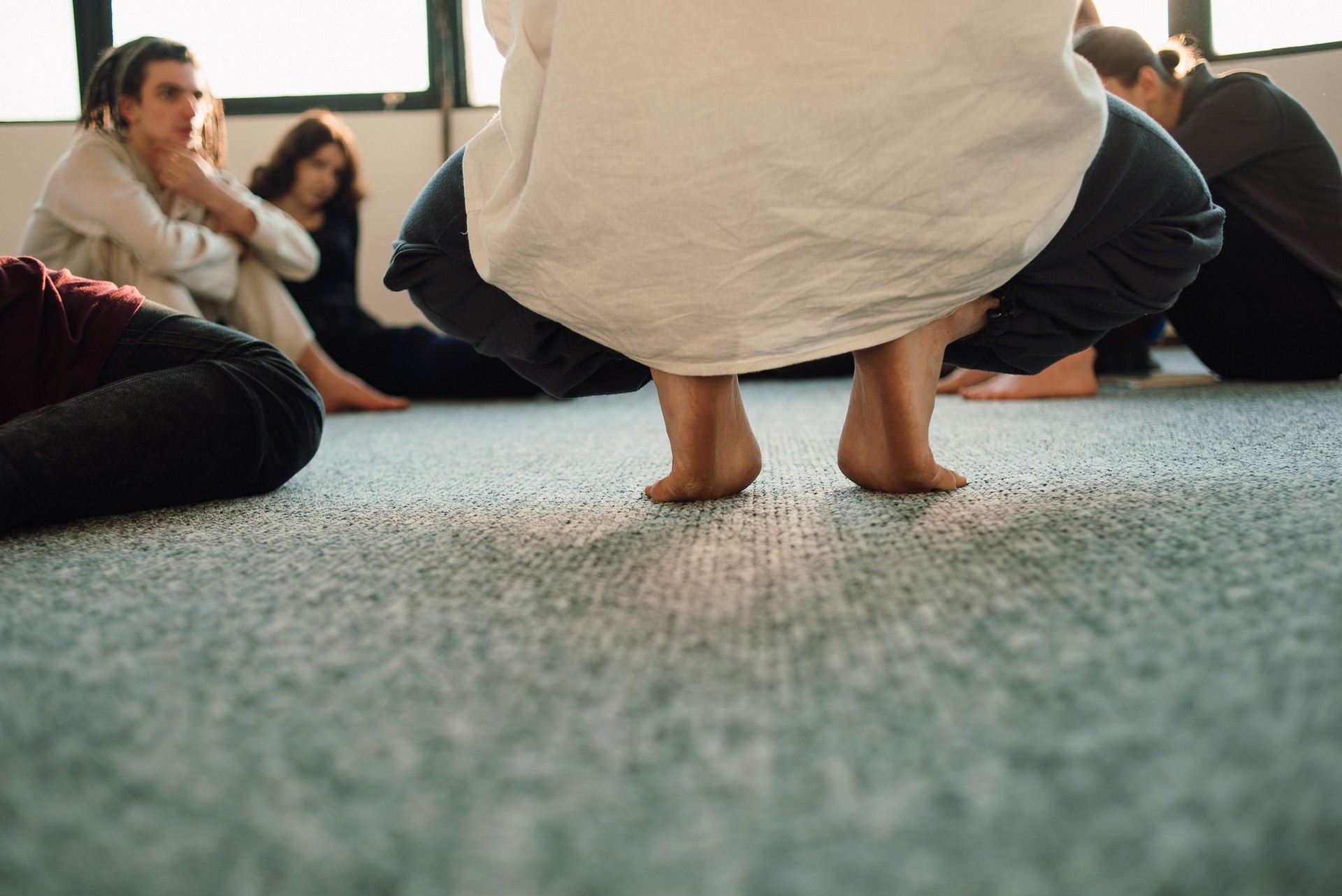 — “After that I returned back to Lviv and found this theatre. It’s hard to explain. Here much begins with the physics of the body and incredible energy. I consider it to be a very personal monologue of a human. There are no doubts that this theatre has changed a lot of things for me. I feel very comfortable here, there are no restrictions or limitations. Our director always tells us “You are free”.

In addition to all stated above, everybody has bare feet. People take off their shoes in the room which became a home of experimental theatre. My boots are at the top of the pile.

— “You know, it should be clean here”, says the young man with the cup of tea for Solomia. “This is the space for motion, song and thought”. The man crosses his legs on the floor and I see his bare feet shine.

Vasyl Sydorko, the student of art and culture faculty of LNU named after Ivan Franko, is also a part of the experimental group of actors.  He holds a book about theatre anthropology brought from the U.S.

The arm of this guy is full of blue ink. 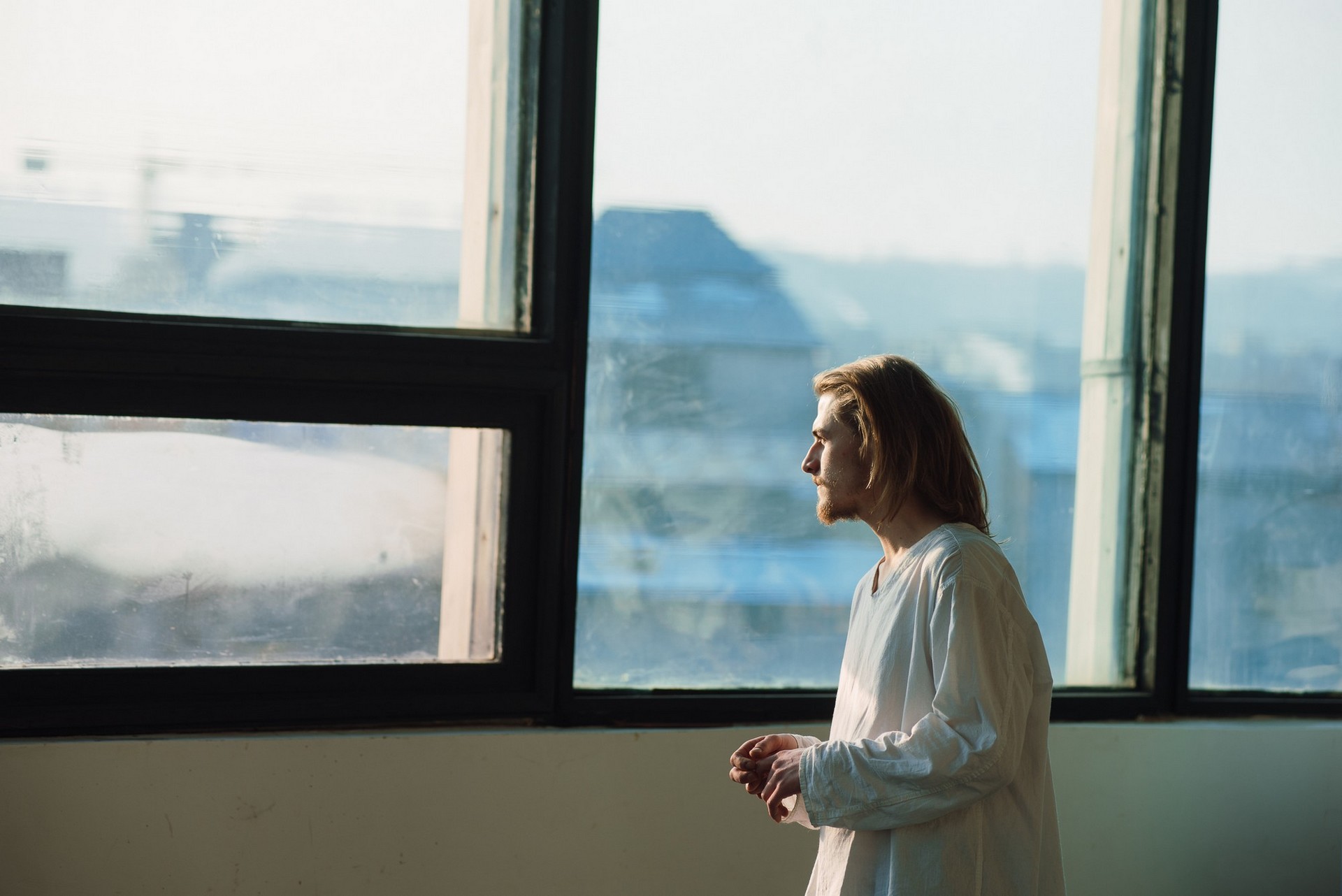 — “What is it?”, I ask him because I have seen the same on somebody else.

— “Some notes. Dates, schedule. In a few days we will present our new play. I really hope it will show people some new feelings and understanding. We worked really hard on it with our director. It’s Seth. It’s all because of him.”

I’ve seen the blue notes on his hands before; they were written, erased and written again on the top. Seth Baumrin is the professor of theatre art of the City University of New York and a director of more than 60 plays all over the world. Right now he works with the group of actors called «Subpoetics International», which in the past few years crossed various borders. The group started in Paris, and one of the factors that influenced the push in theatrical improvisation was the tragedy of Charlie Hebdo and the feeling of fear and xenophobia that began to spread around Europe. 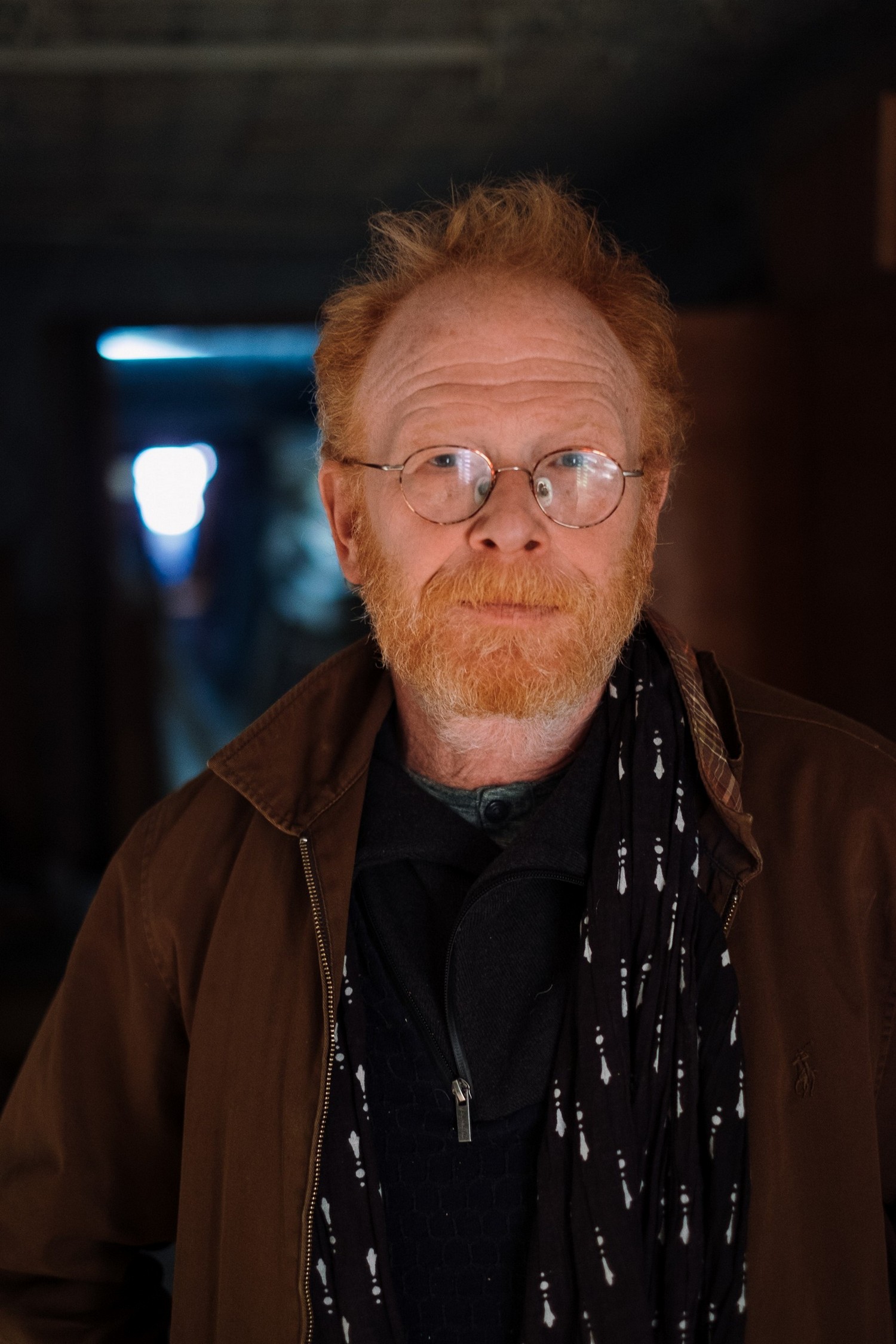 The student of a well known experimenter Jerzy Grotowski has spent many years in Europe and its Eastern part mostly. Scientific research and the theme of life of a theatre under the pressure of government and their interaction have led the researcher to Ukraine. Of special interest for the director was career of Les Kurbas.

The works of Les Kurbas amazed the American so much that for many years he has come to Ukraine with his master-classes, trainings and performances

— “You think of him as a great artist of Ukrainian theatre. And I consider him to be a great artist of world theatre of the all times”, the red haired man explains at the long coffee talk. “I believe that he changed theatrical tradition immensely.”

The works of Les Kurbas and communication with actors of The Les Kurbas Theatre in Lviv amazed the American so much that for many years he comes to Ukraine with his master-classes, trainings and performances. 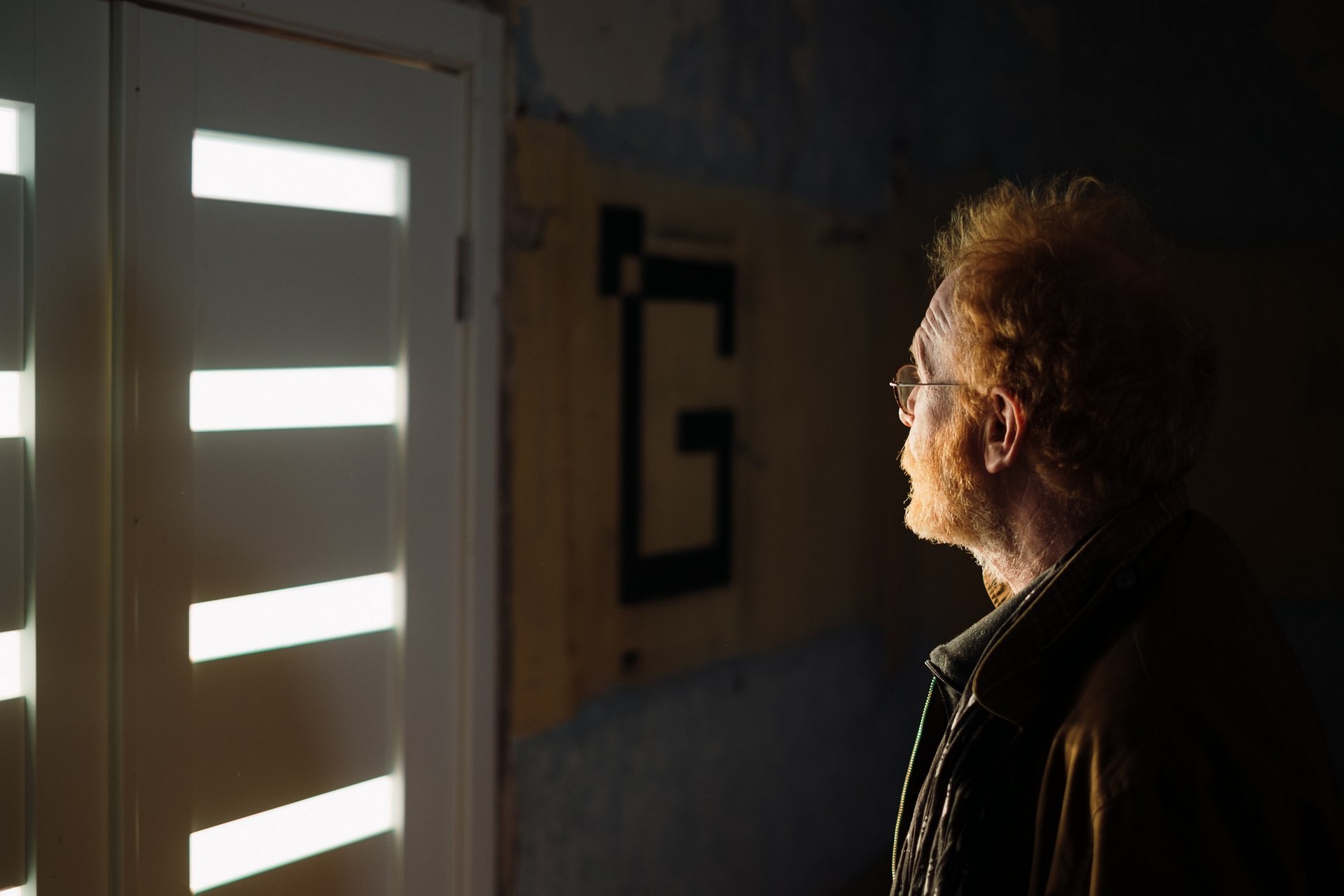 Last year in Lviv on the improvised stage of the theatre named after Lesia Ukrainka the actors of «Subpoetics International» presented their own play and spoke eight languages: Arabic, Farsi, English, French, German, Haitian Creole, Jamaican patois, and Russian. They showed their play “NomansLand” in the Polish town Opole, and now they are engaged in work with newly formed group of actors called “Gershom” in Lviv.

But the theatre is not the only thing which connects this energetic and charismatic man with Ukraine.

— “My grandfather was not eager to tell this story”, Seth adjusts his glasses and I notice wrinkles on his forehead. “Once I deliberately took him to town for whiskey in order to get these stories out of him. The Jews from Central and Eastern Europe do not like to discuss the WWW II. They are all scared to talk about the pogroms and the Nazi regime and my grandfather also kept the silence.” 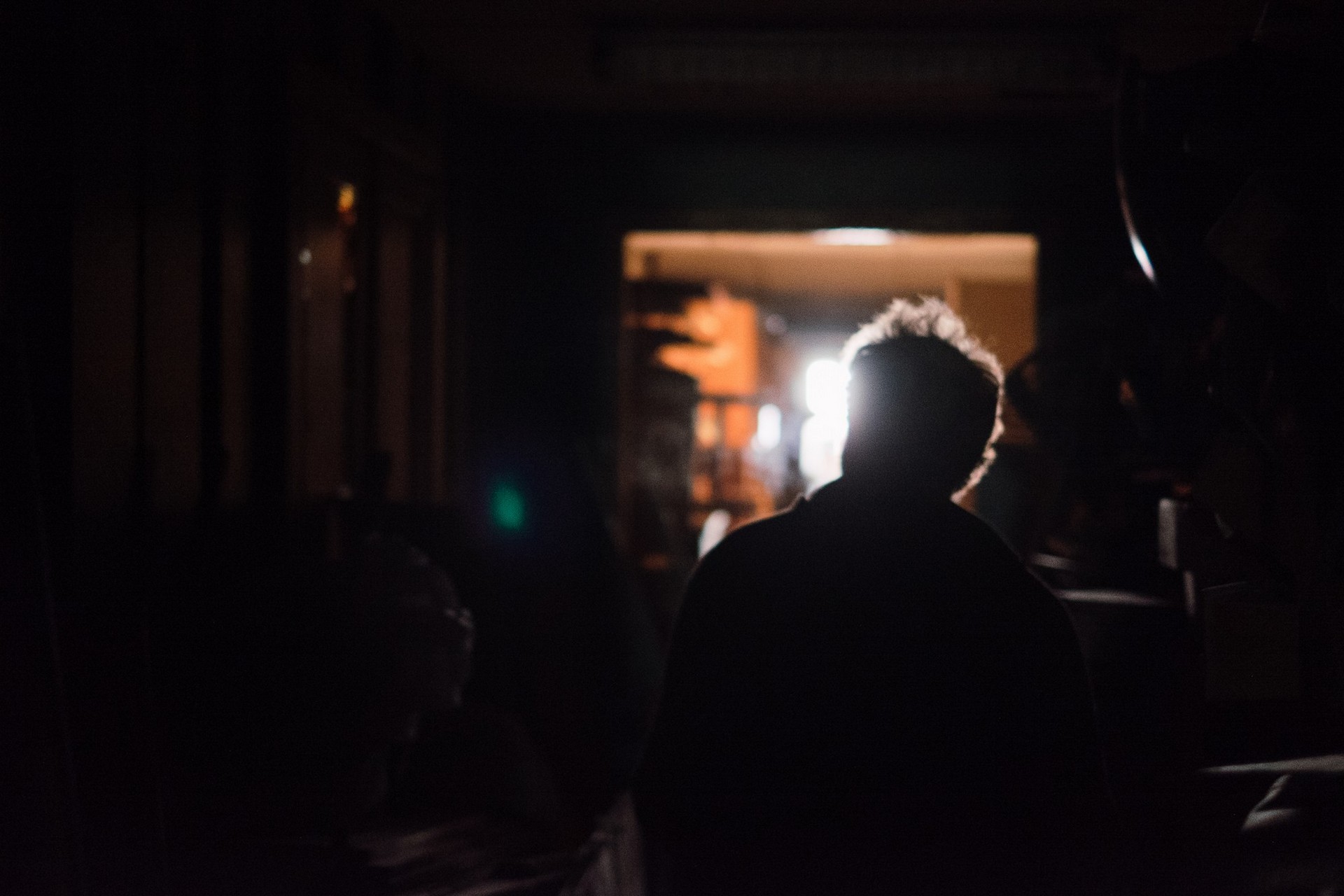 “He was from Stryi. Paradoxically my grandmother was also from Lviv region but they’ve met in New York at the meeting of the “Association of the Jews of Stryi”. I think it still exists. They danced there. They may have never met is Stryi because of the social class division. My grandmother was rich and my grandfather was poor. But New York has changed everything.”

— “When the pogroms of Galicia came to Stryi all the local Jews tried to escape. My grandfather David was a little boy and cried a lot.  His older brother Max, who was my uncle, tried to calm him down but did not succeed much. Then people told them: “If this little boy does not shut up we will have to kill him. Otherwise we will all die”. The boy did not stop and the family had to come back. The Germans did come to their village but since everybody was gone they did not think they would find a soul. In this way my grandfather and his brother stayed alive. So they walked all the way to Gdansk in order to escape to States. I have no idea how it was possible to walk that far. But the story after that is even more interesting…” 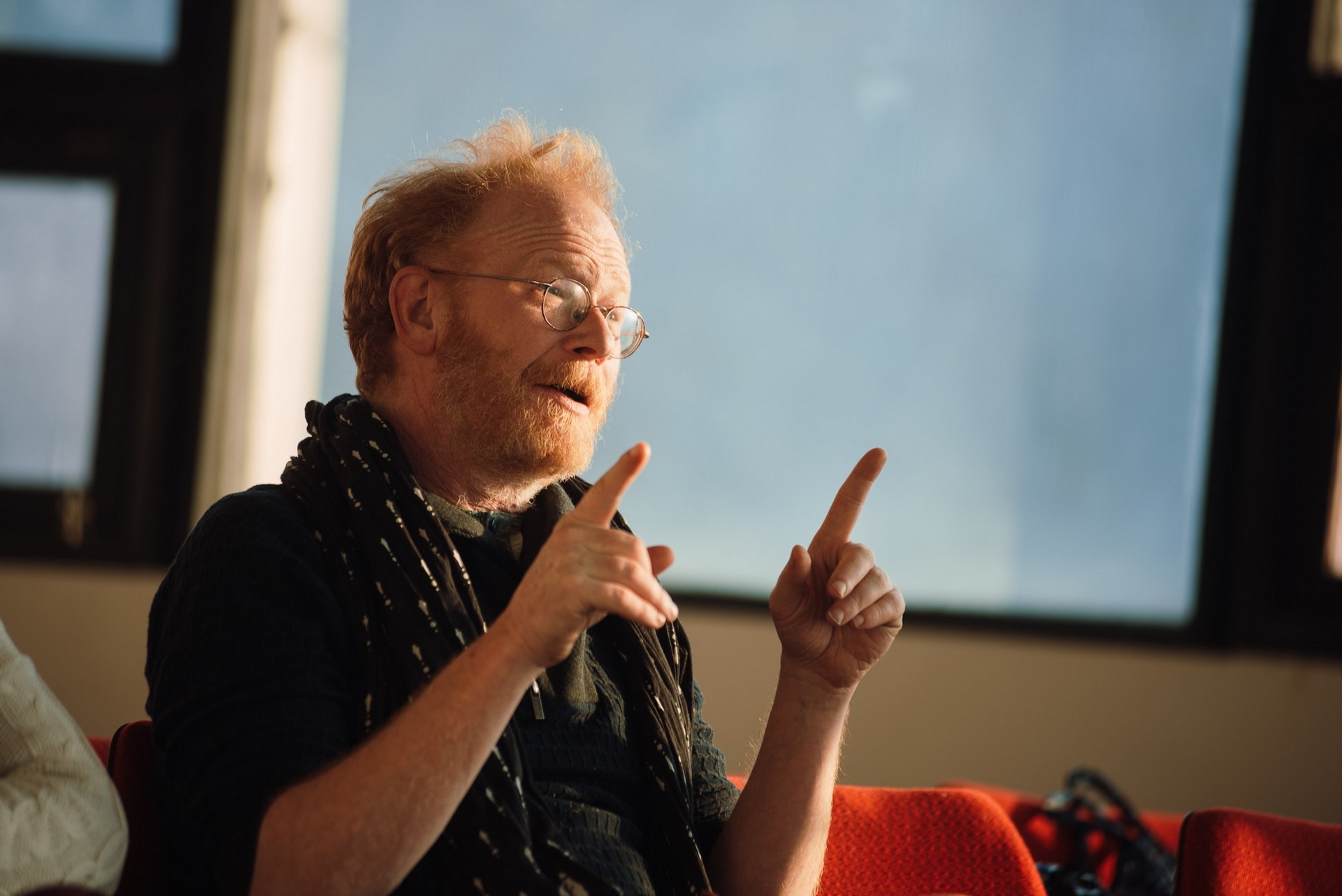 — “They boarded the ship without tickets. They did manage to survive on the ship to The USA but they did not have any documents to enter the new land. When the boys were near to the port they saw the Statue of Liberty and decided to jump off the ship and swim to the shore in order to avoid the documents check. The boys swam in the wrong direction right to the officers. The brothers spent three months in the place for illegal immigrants, but fortunately, they were allowed to stay in the country.”

— “Probably, without this story I would not exist”, said Seth. “In 2007 I came to Ukraine. I decided to visit Stryi. My grandfather told me about big Jewish world. Now there almost none of us left. Nevertheless the absence of Jews in the town is just a part of its history. It happened. It’s a part of my life and I accept it.”

Stranger in a strange land

Vernice Miller is an actor from Jamaica with a snow-white smile. She has worked together with Seth for more than 30 years and now she came from New York to help the theatre group. Vernice carefully watches the rehearsal, gives advice, corrects the intonation of the actors who sing. 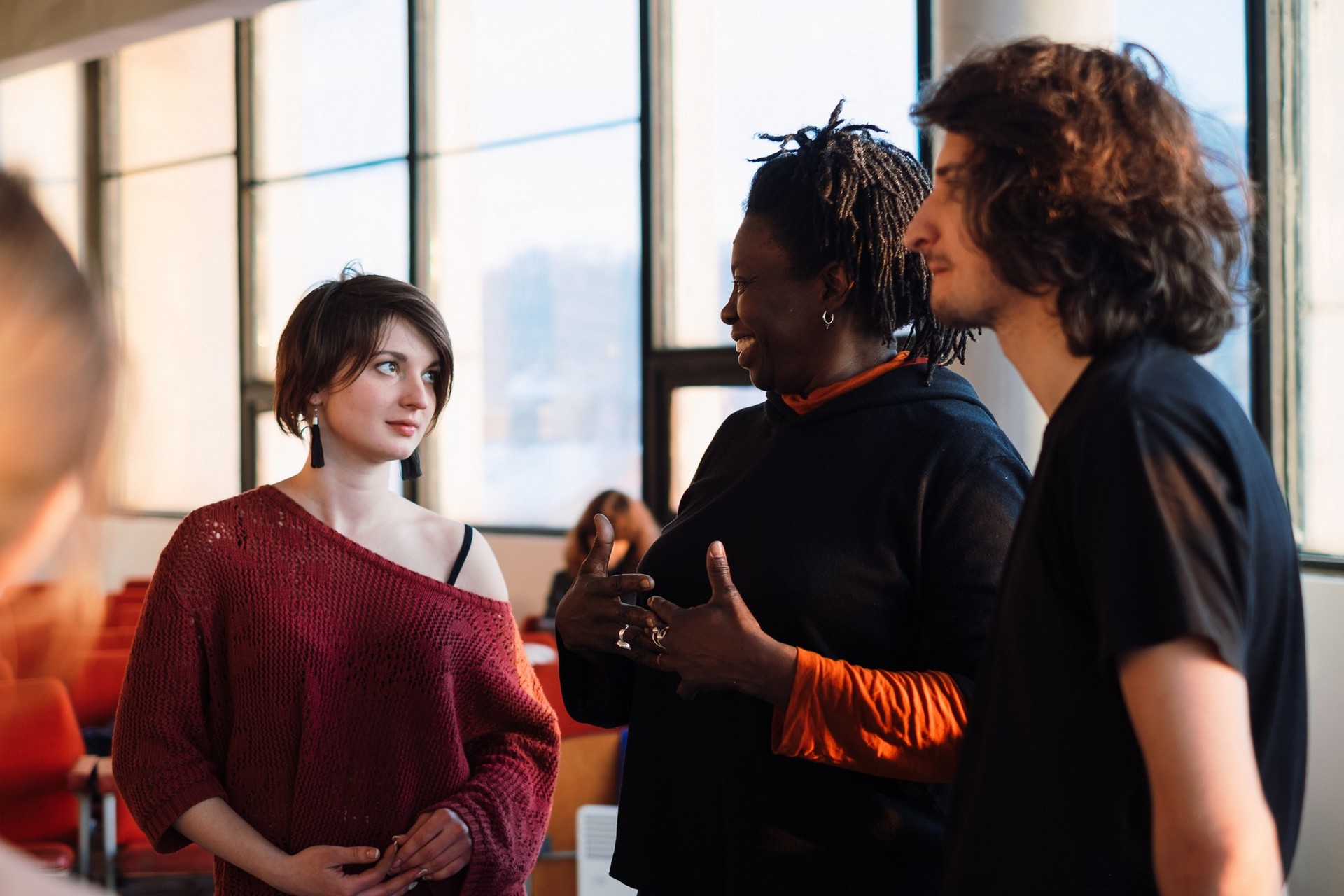 Before the premiere the air in the room is full of excitement.

Tonight this experimental space will be opened. It should become a theatre on the regular basis. At present the American director pays for repairs of the facilities which demand a lot of money and for all other needs. He believes that this talented group of actors requires space where they can rehearse and concentrate. They can also organize not only plays but also art exhibitions.

This play is about evolutions in history, about the move from village to city, from dreams to real life

On the day of premier the team received a good sign — The Department of Culture of Lviv city council showed their interest, and now everybody hopes to get some support from the government after the play. 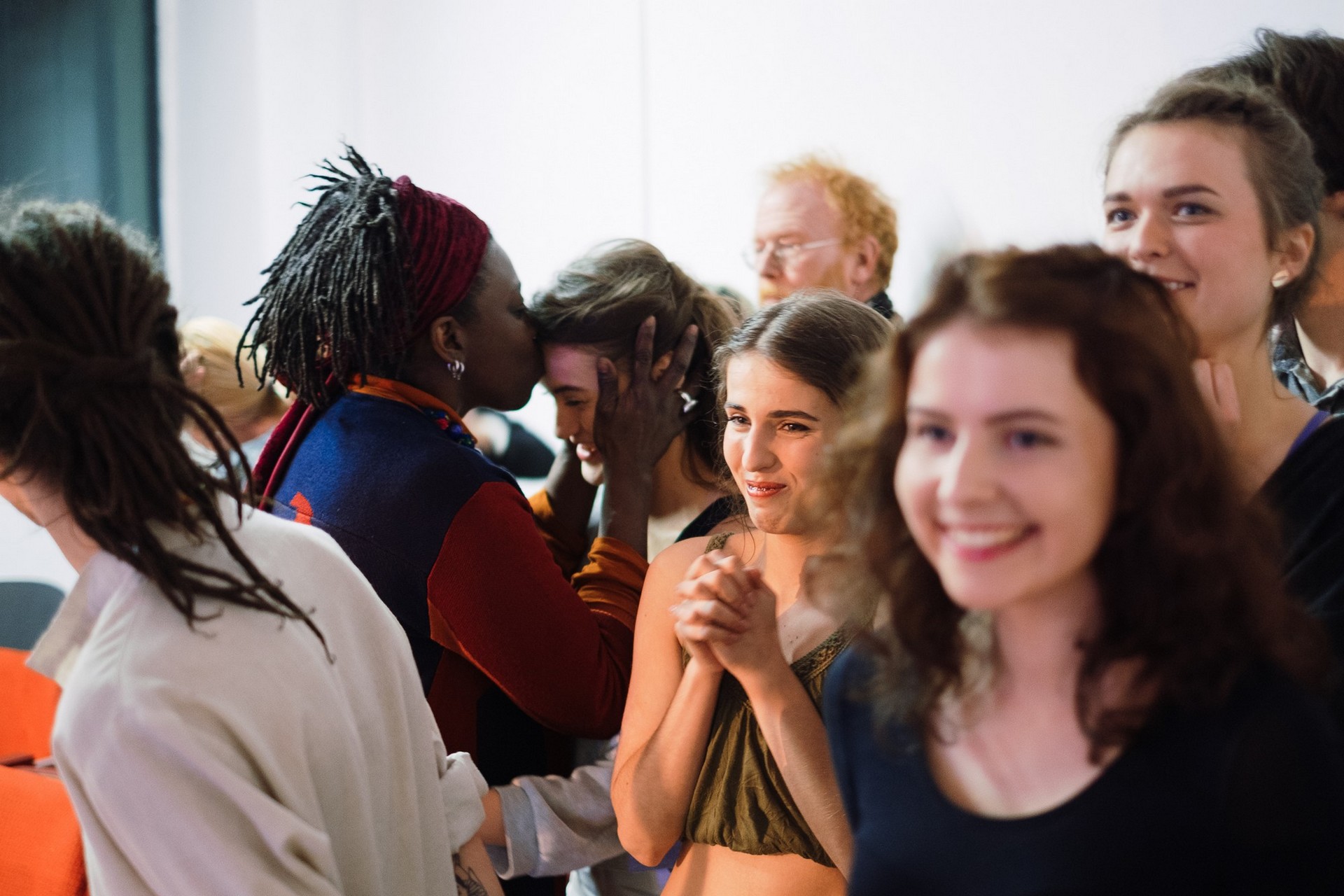 — “I think, this play is about evolutions in history”, says Vernice. “About the move from village to city, from dreams to real life. It is a journey from ignorance to knowledge, from the past — to the future.”

Diana Gorban, the journalist who works with Seth Baumrin’s team for a year, came for the play earlier.

— “Last year I came for the play in Poland right after the road trip without any rest. I was very tired, but I liked it so much that I decided that I want to stay with them. I adored it and came to their rehearsals almost every day. I enjoyed even watching from the side how the story of each actor transforms into the performance and how they become one big heart. It makes you think over what is your story? why you are here? what people you meet? how you interact? what is on your mind?”

Before the beginning of the play Diana is at the entrance near the poster “Gershom”, letting people who registered in. Although the room is full, visitors come and come. All of a different age and appearance. There came three times more of viewers than expected. There is not a single spot left around the improvised stage. 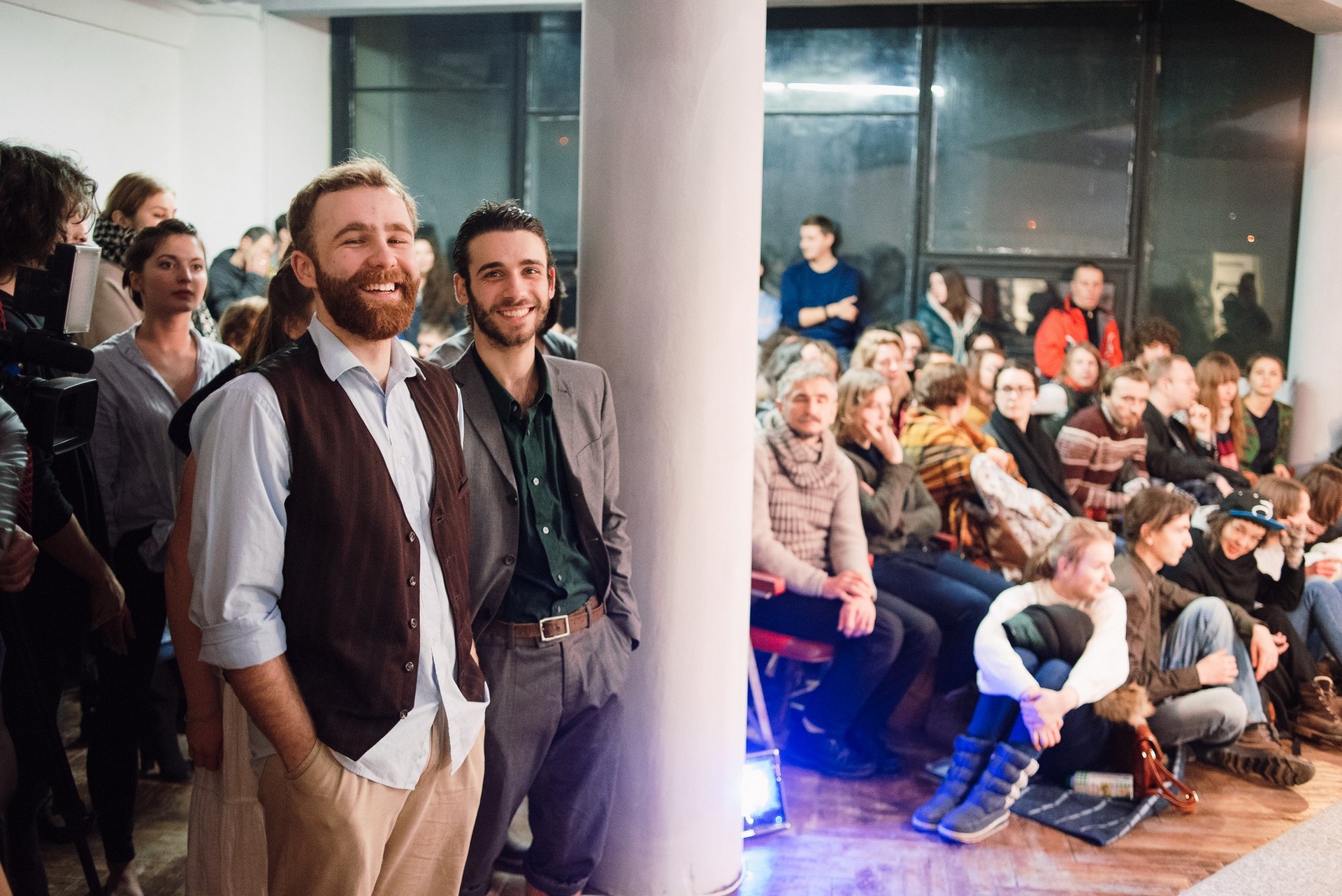 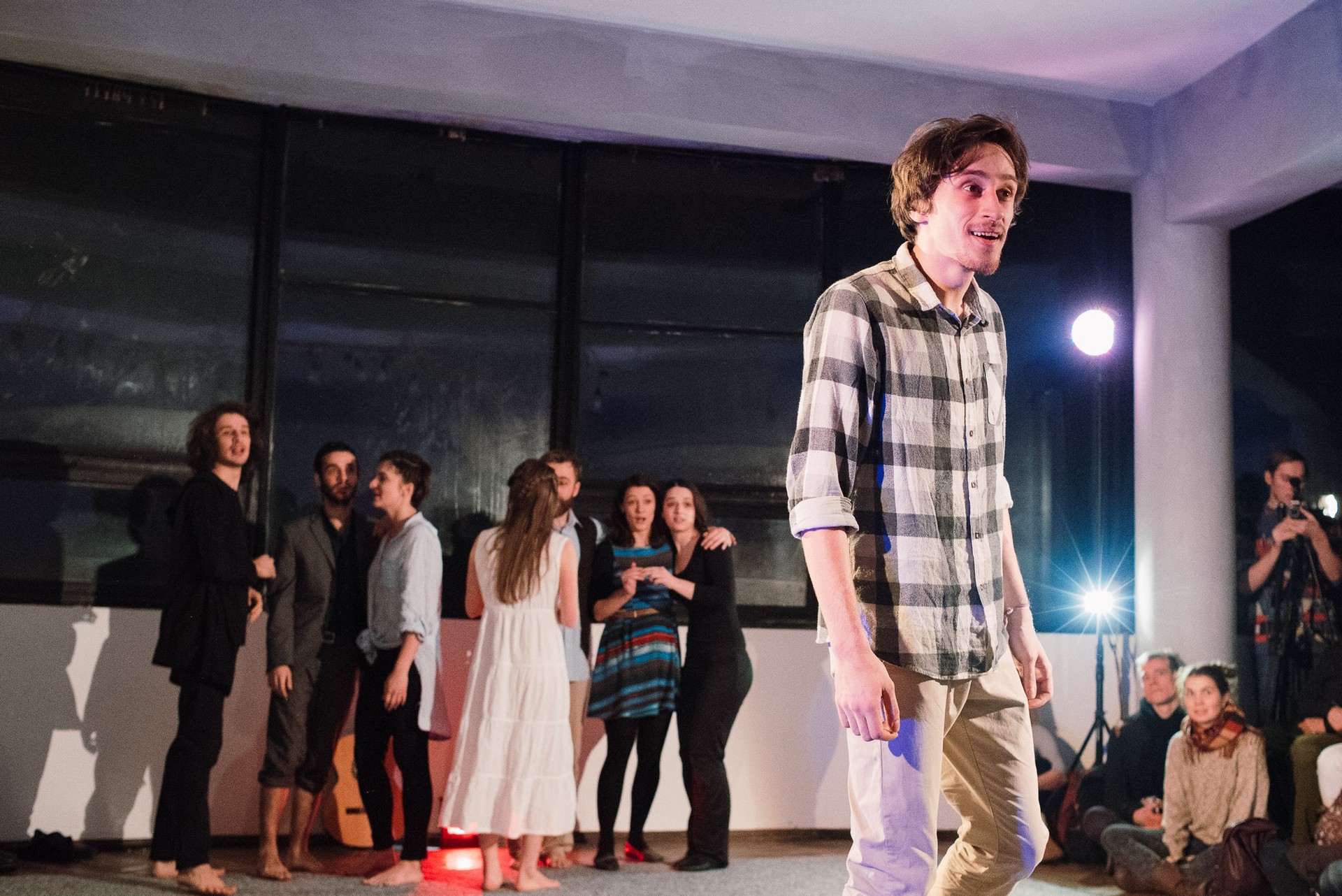 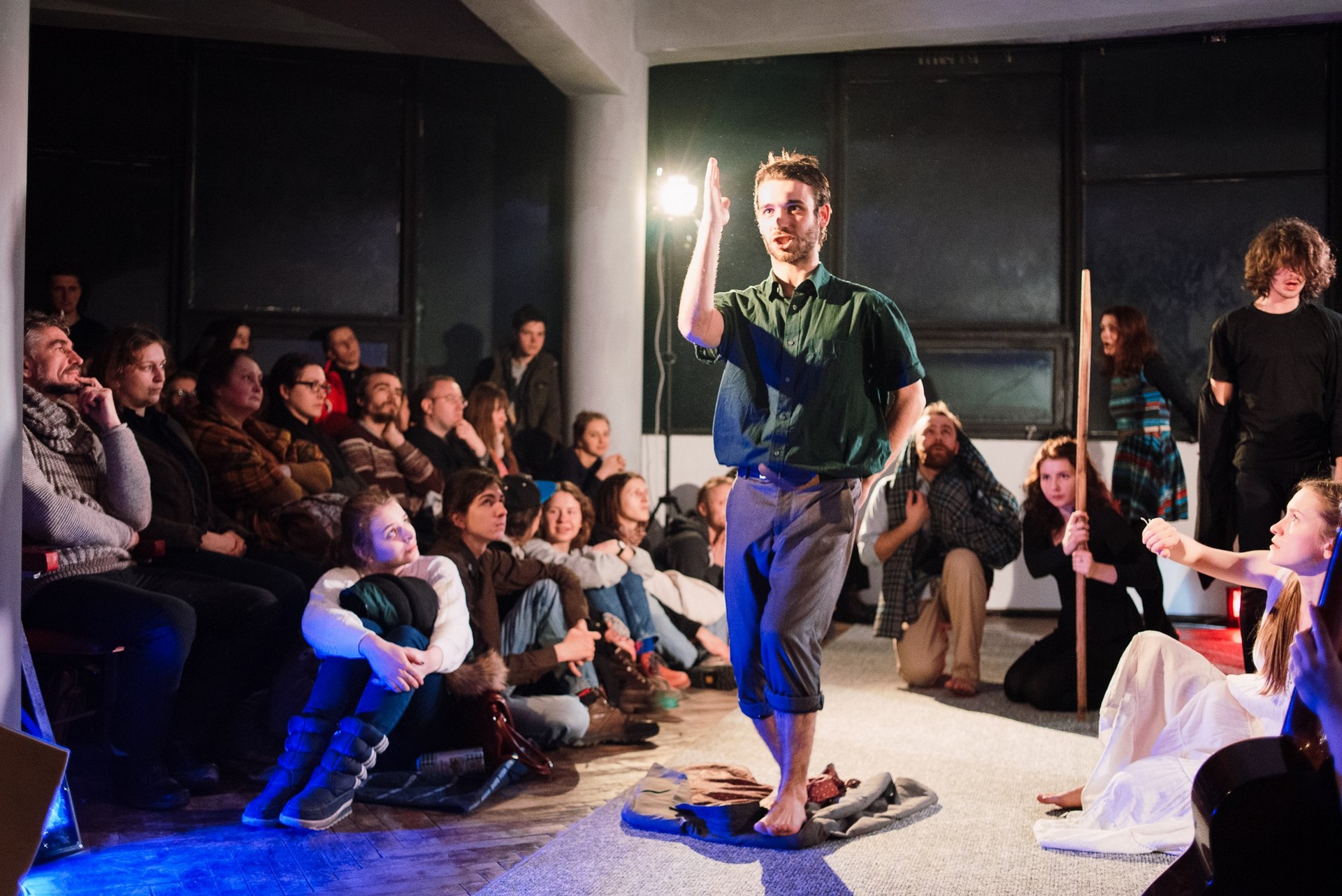 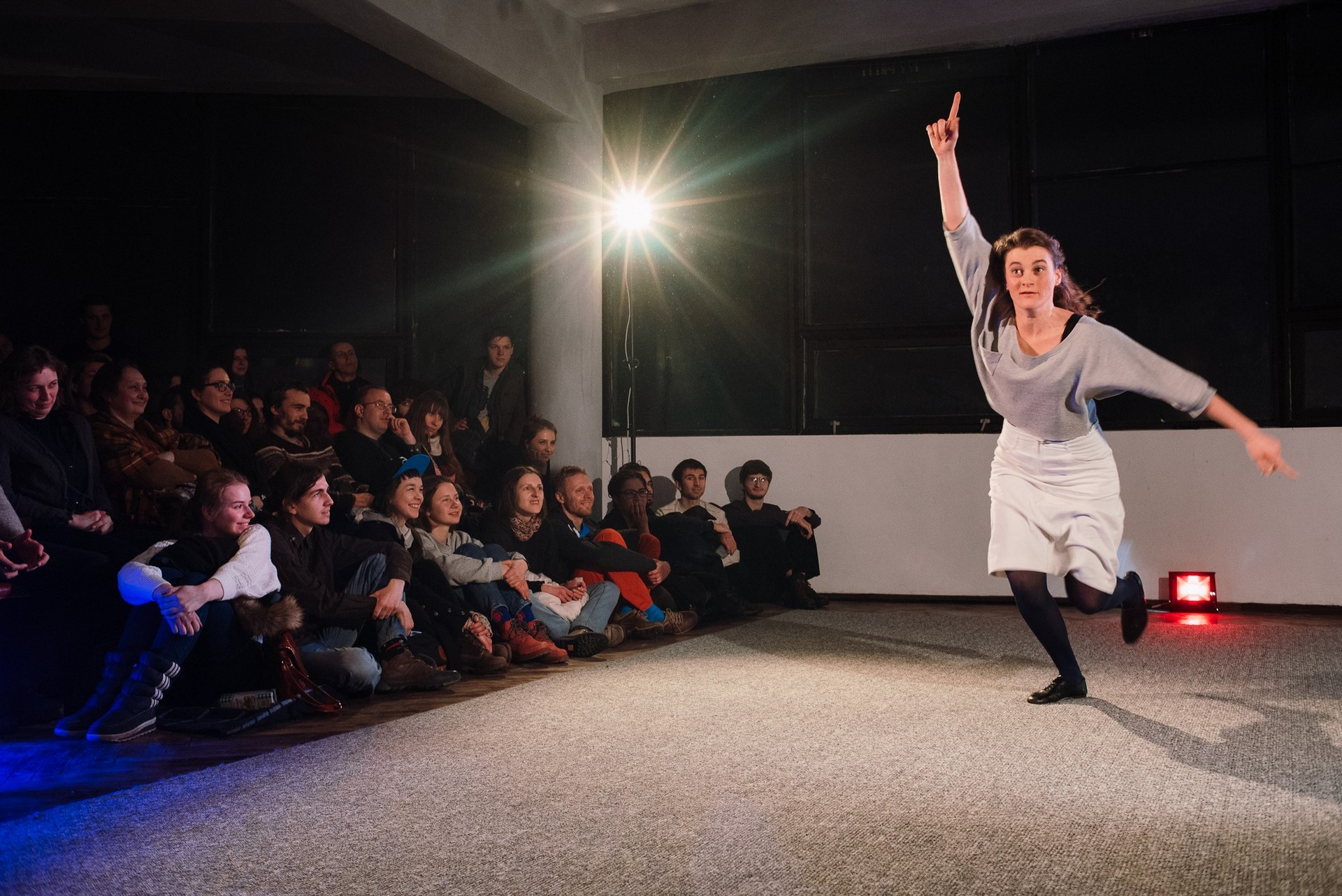